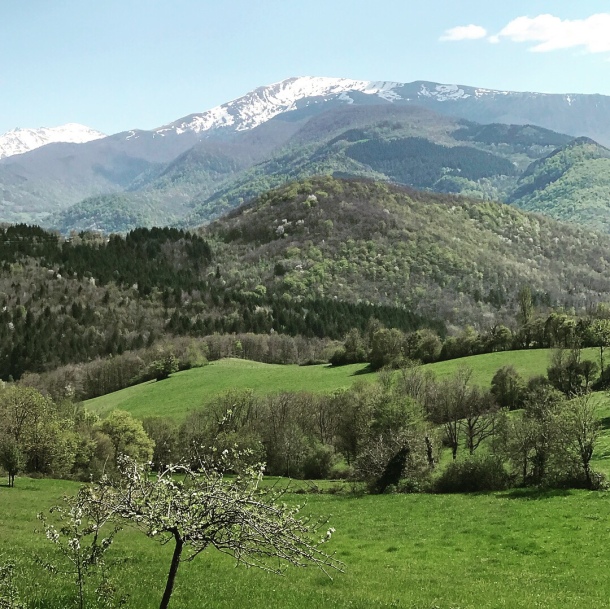 The Pyrenees is a range of mountains that borders Spain and France. There is an eastern, western and middle section. We visited the middle section on the French side.

We stayed at a spacious HomeAway apartment that has been a family rental since 1981. The owners spoke no English and never had Americans stay there. Friends of theirs were interpreters for us

Here is our rental. It was part of their home and barn complex. The original home dates to the 1600s. We were surrounded by gorgeous views! 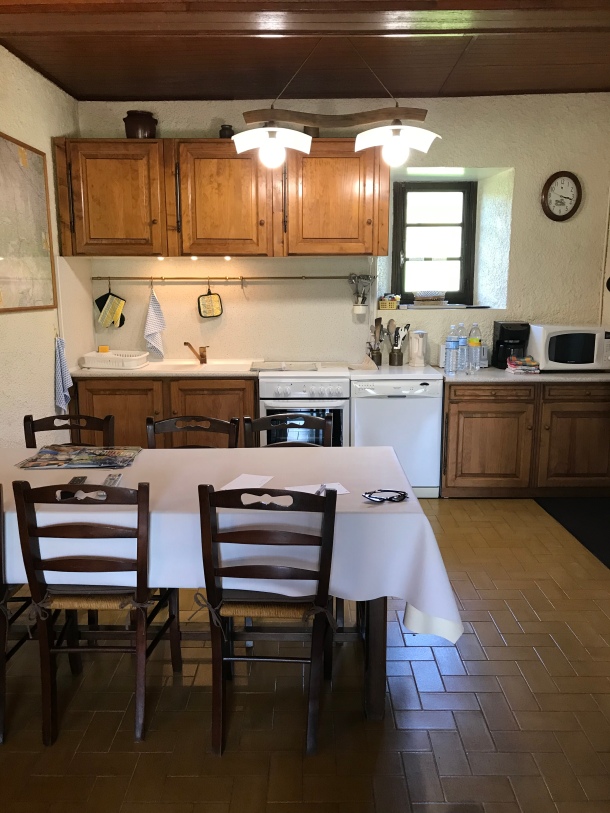 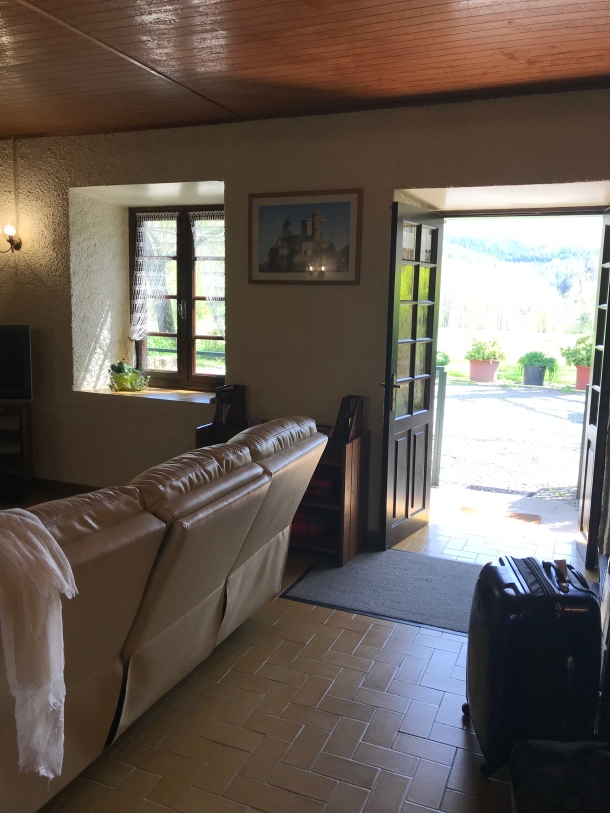 Our first day we had beautiful clear weather and drove up into the mountains to see the scenery and snow.We found the Plateau de Beille. In the winter season it’s a cross country ski area which also offered snow shoeing, dog sledding and biathalon training. There were two types of snowmaking machines there and a luge tunnel.

We saw people hiking with special shoes and sometimes using walking poles. We were unprepared so we observed 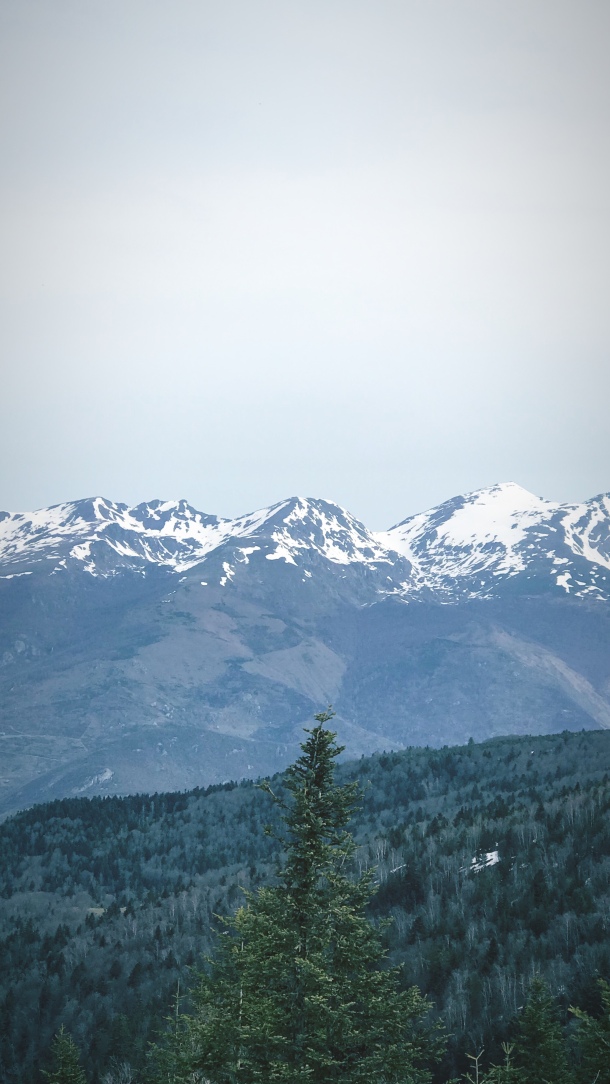 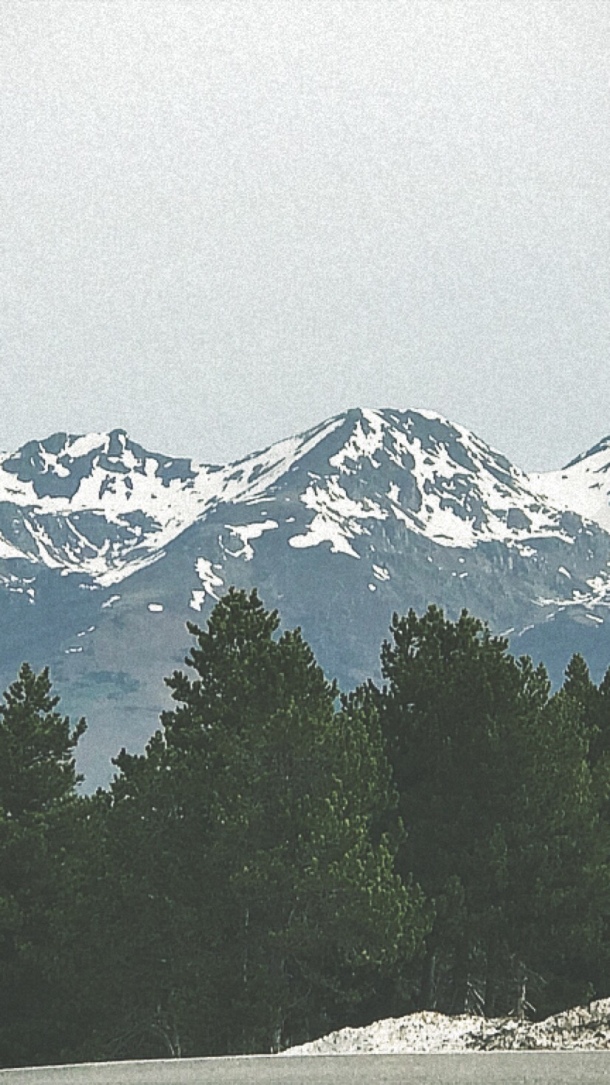 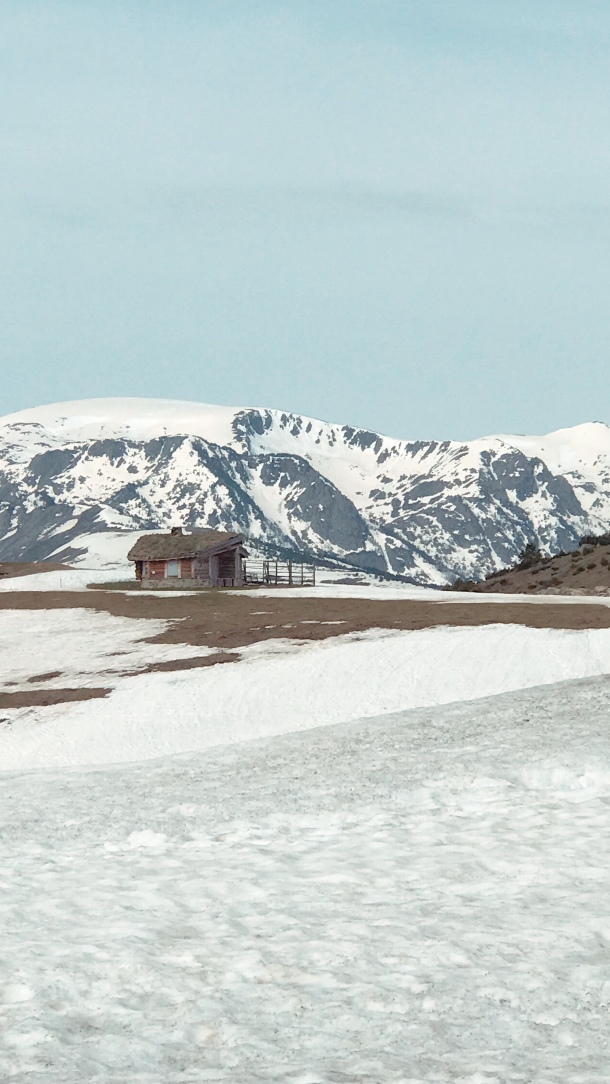 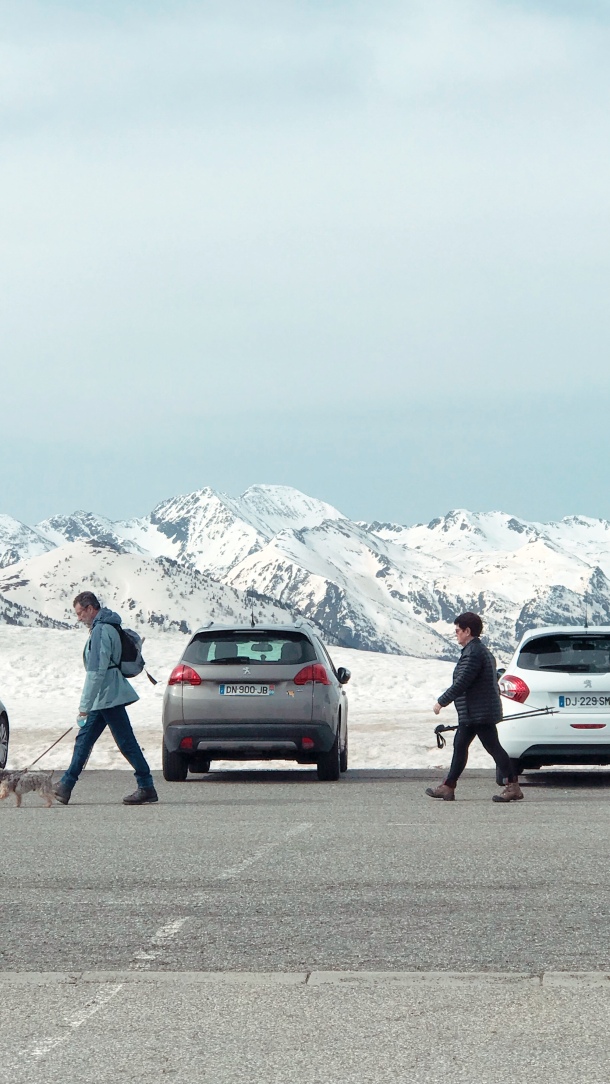 At the base of the mountain we came across a small market in Cabannes. We bought some cheese and combs made of cattle horns. This market had food vendors too such as this man making garlic and olive paste sandwiches! That’s a lot of garlic!

We continued to explore the region in a loop pattern and found beautiful mountain lakes, waterfalls and rivers. 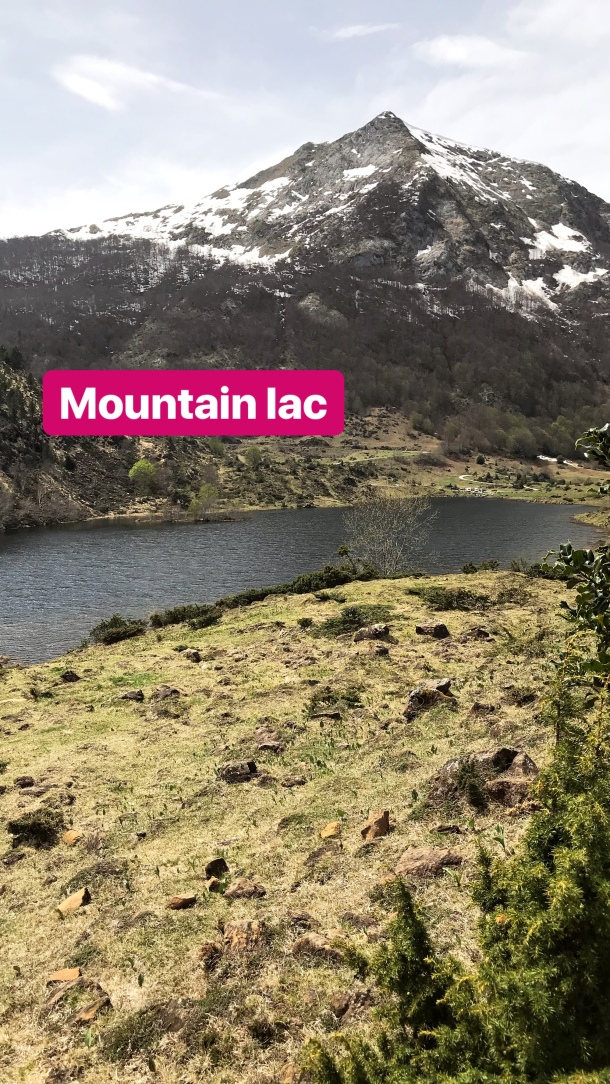 The ancient terraced orchards and endless stacks of wood were mesmerizing 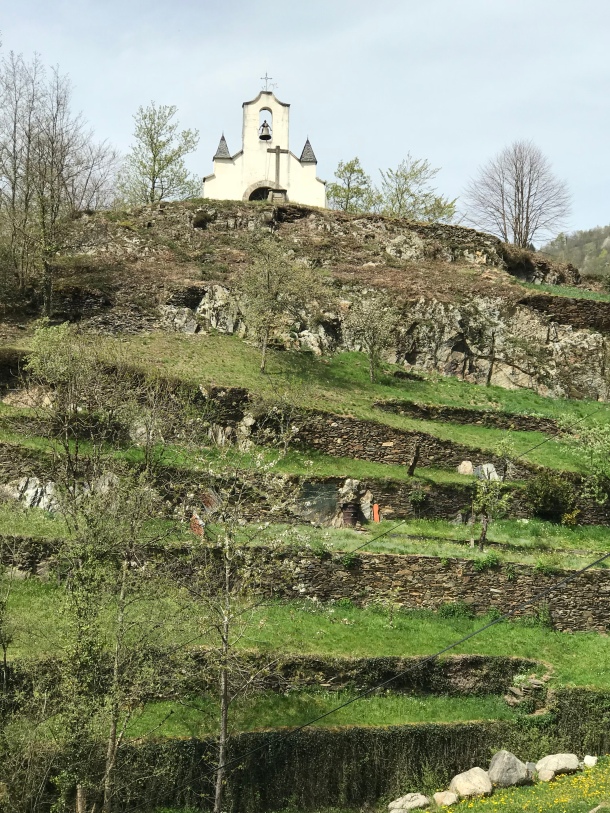 We found a spot for lunch in Vicdessos. It was a very hot day in the sun so we went inside which was a rustic wood cabin style.

Our first course was local meats and bread and butter, served with tiny sour pickles/cornichons. 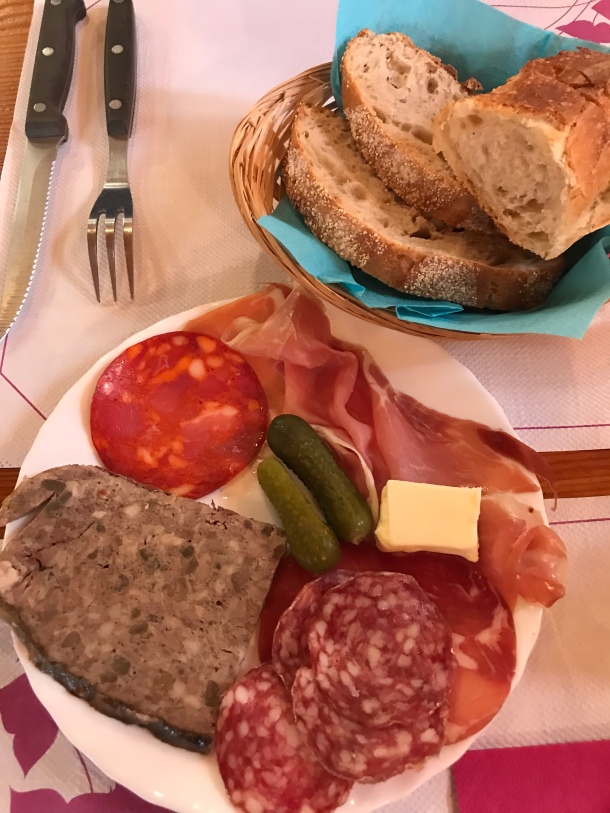 I ordered a whole brook trout with chopped endive salad. Dave had the breaded pork chops with fries

All the salads we’ve eaten in France have been dressed in a vinaigrette with Dijon mustard. It’s yellow. We found some prepared vinaigrette at the grocery store and it’s always the same yellow. I prefer my own to the store bought because homemade is a more true mustard flavor. The French don’t call their mustard Dijon style as we do. They call it mustard. And their vinaigrette always has this strong mustard in it! 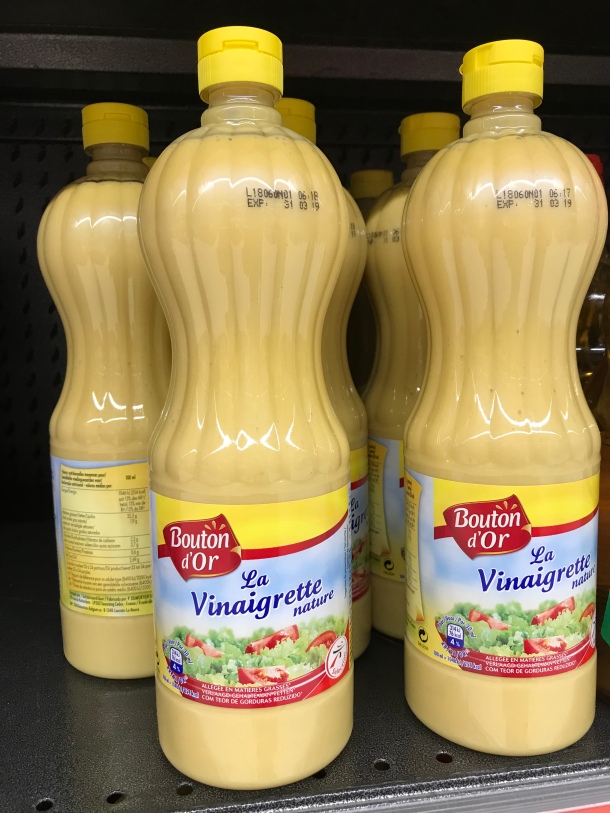 Dave had a glass of wine. It was served hot with sugar on the side! 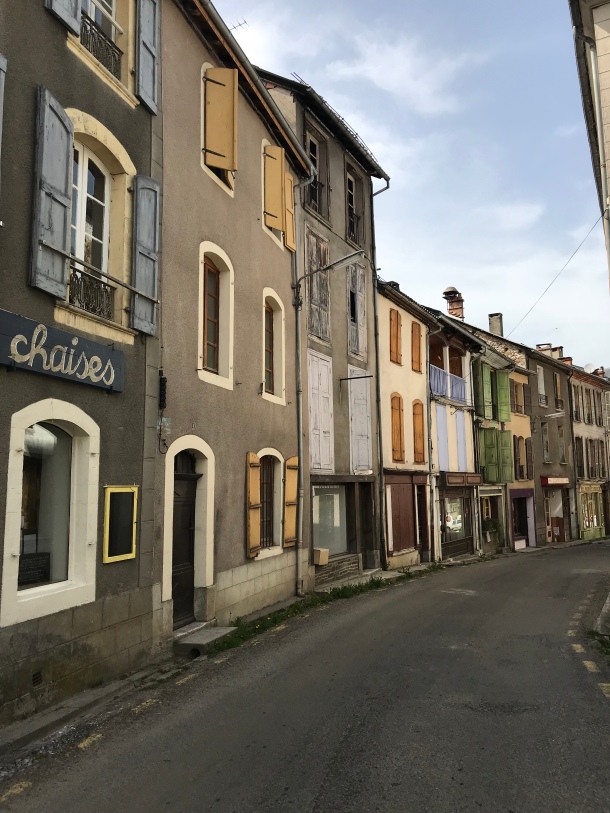 Monday we drove to a larger town of Mirepoix because this was their market day. There were musicians playing unusual instruments and people making crafts. The market was held in the main square which is lined with half timbered buildings. The cathedral is nearby and the market trickled into its surrounding streets too.

Rolls of lace for the French windows. Some people make their own lace in their regional patterns

Birds for your farm life

We found Llobet, an old style French restaurant for lunch. It was decorated in orange walls and light green chairs. The walls were covered with hunting prints. One person handled the entire front end as host, waiter, and bus boy.

Dave ordered the 3 course menu of the day which started with onion tart and salad. The tart filling was very thin and tasty. He thought it tasted like the tart flambé from the Alsace region 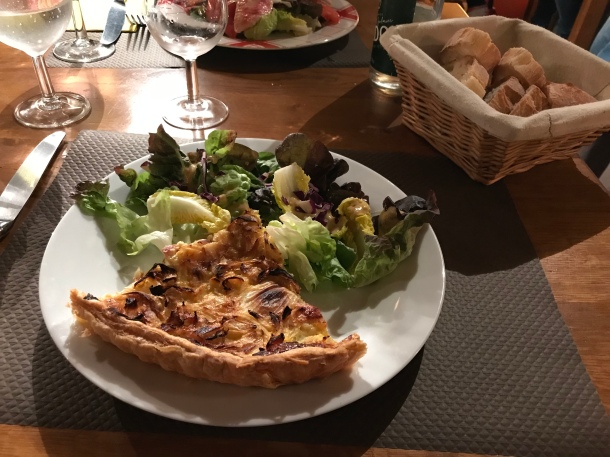 He then had a lemon tart, again a very thin filling 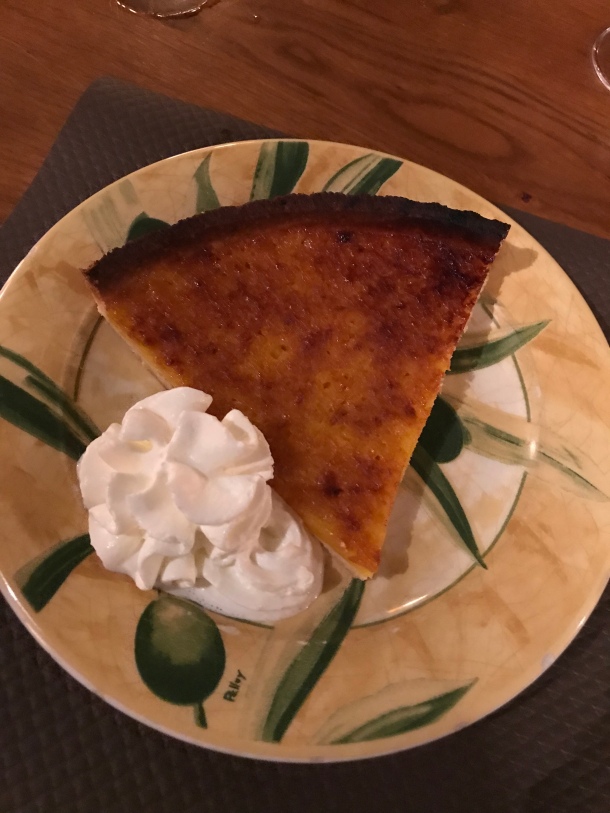 I ordered red fish with salad. Light and yummy. Mustard vinaigrette, very little, and the lettuce was in whole leaves. 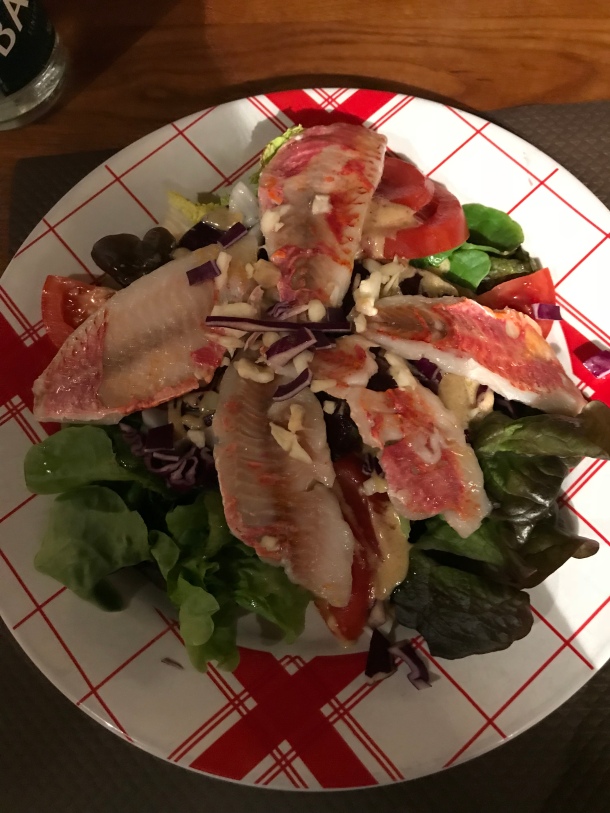 We then drove to a big lake called Lac de Montbel. It was a dull overcast day and slightly rainy, so the lake was not too pretty today. We drove through the town of Montbel

Tuesday we started this sunny day at a cave, Le Mas-d’Azil. We first drove through the cave and after we parked walked in through the pedestrian walkway. We followed a French only tour, but learned from the English printed handouts. There were no etchings and drawings here. This cave was famous for the artistic tools and bones found there dating to 13,000-14,000 years ago. 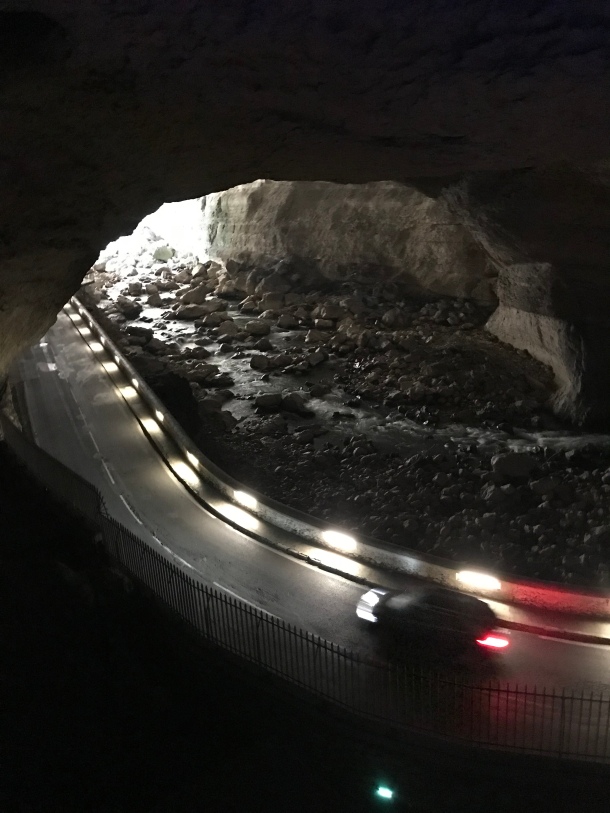 We stopped in the town of the same name before the tour and had a coffee and bought some local pastries.

After the tour we had a picnic near the river out of the trunk of our car.

We drove on to St Lizier. Looked around the cathedral and cloisters. Tried to find a good spot to see views of the mountains. Found a shop open that sold local artists crafts such as herbal mixes, soaps, juices and leatherwork.

Wednesday was another dreary day so we went to another cave. La Grotte de Niaux. It was a short ride from our place. We arrived at 10 and learned we could not have a tour till 1:30, but it would be in English. After talking with a few interesting American travelers we went to lunch in the town of Niaux 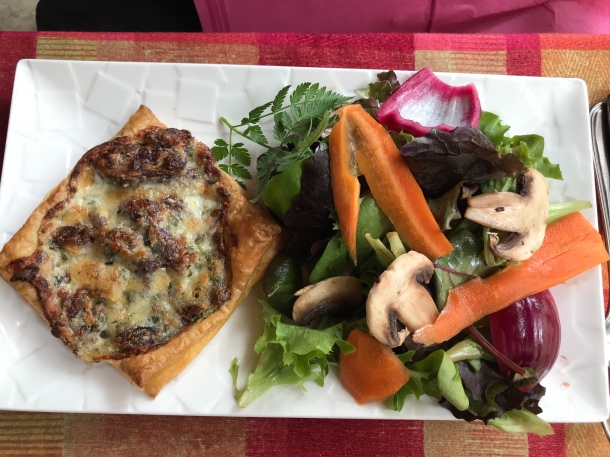 He then had a beef stew with smashed potatoes formed in a timbale shape.

I had lentils cooked with smoked pork and sausage. The lentils and pork were flavorful and the sausage more plain

The tour of the cave was fantastic. There were only 7 of us. We were all warned again how far, slippery and uneven the trip to the cave drawings were. We all did great and I was the youngest! The walk was 1/2 mile to the cave drawings. They were mostly bison with a few ibex and horses. All in black charcoal. It’s a miracle that these have been preserved so long. Great tour guide and unforgettable experience being in and walking through this cave system 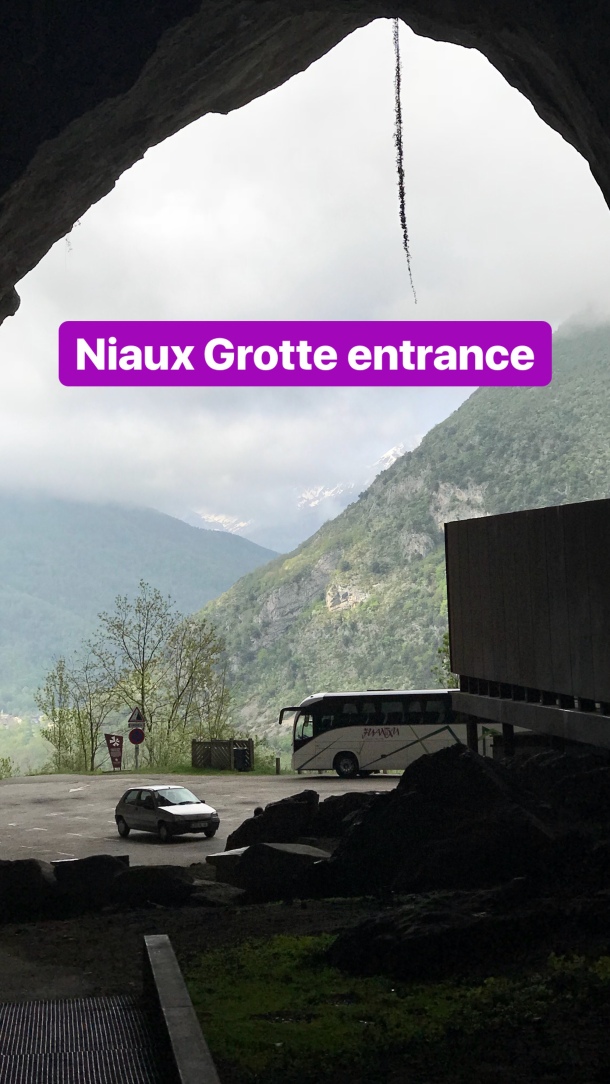 Thursday was our 42nd day of travel and our first time not taking a long excursion! We hung around the house and explored the little town of Saint-Paul-de-Jarrat where we were staying 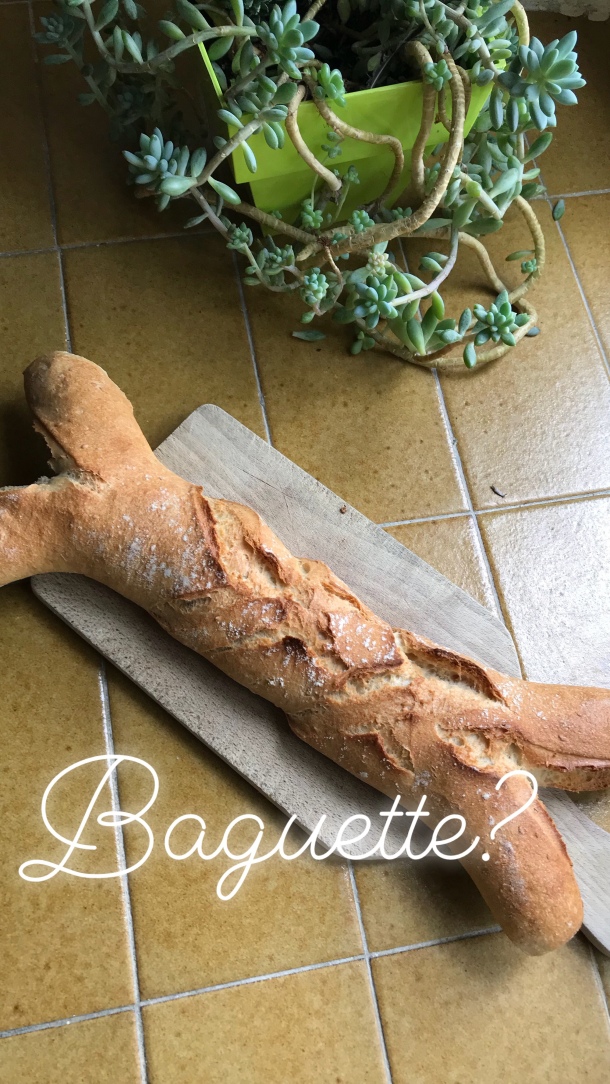 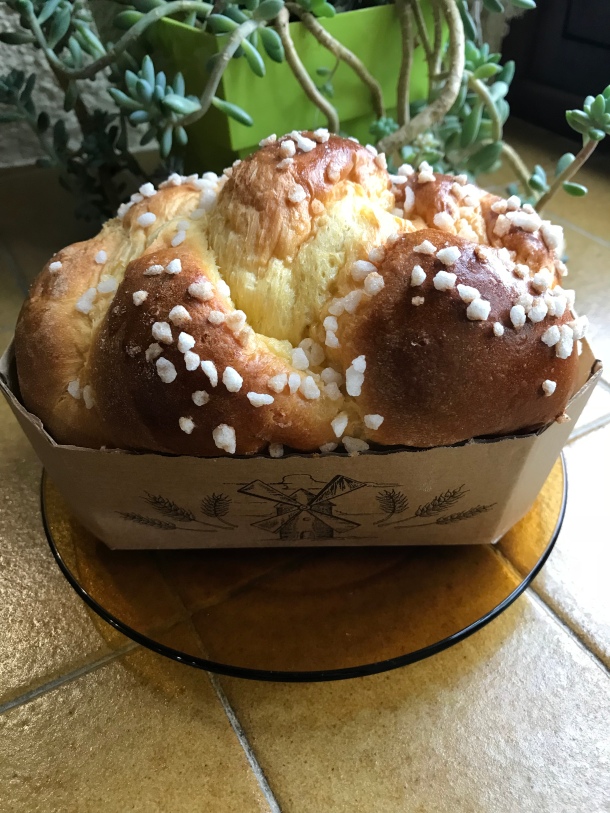 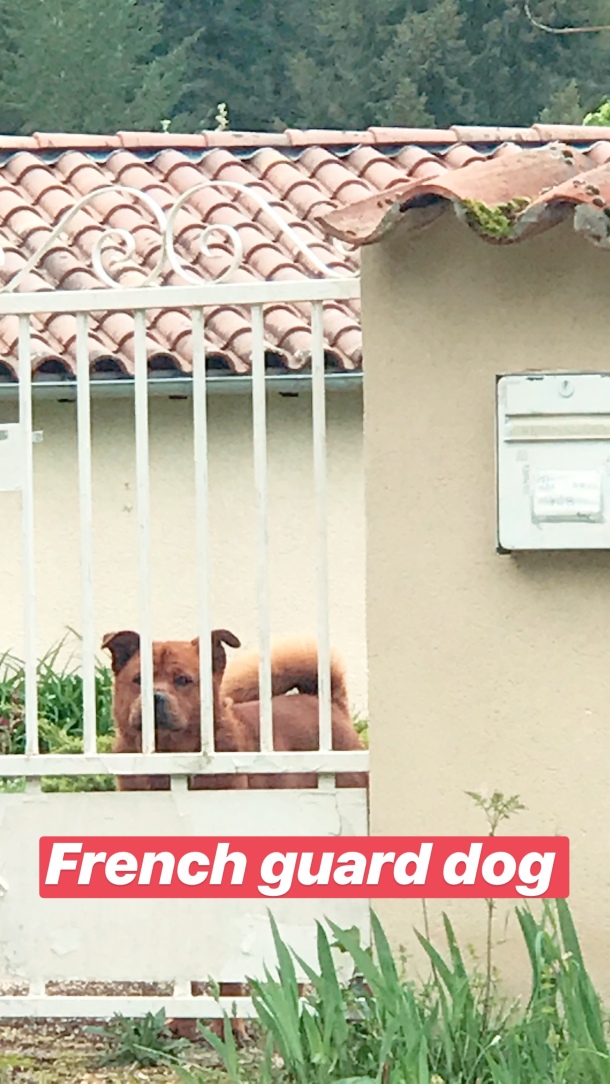 Our last day we spent in the larger town of Foix. We explored the market and an elaborate castle and enjoyed the views from above 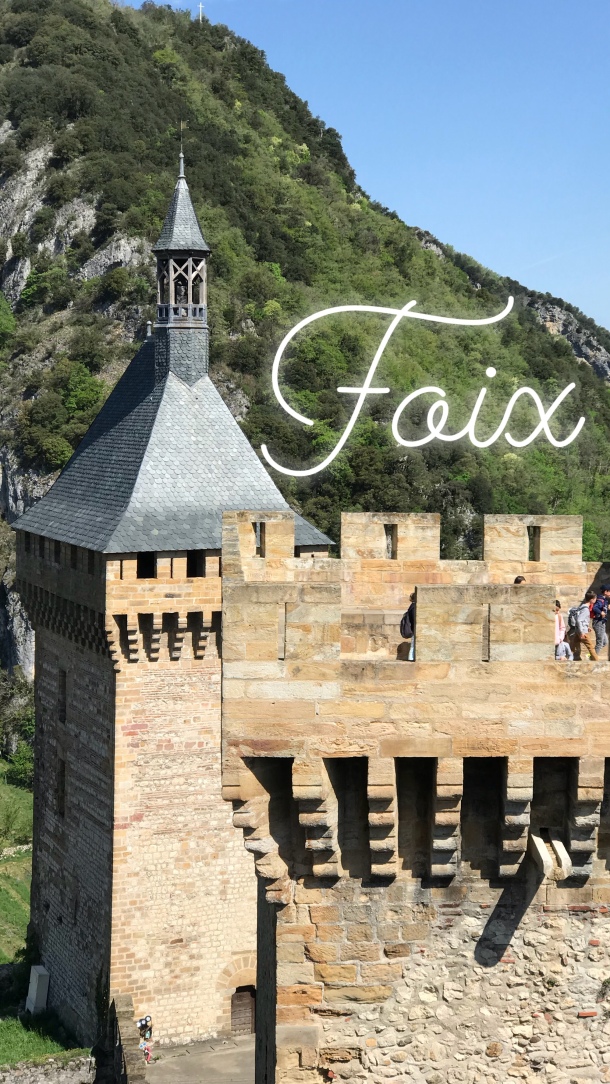 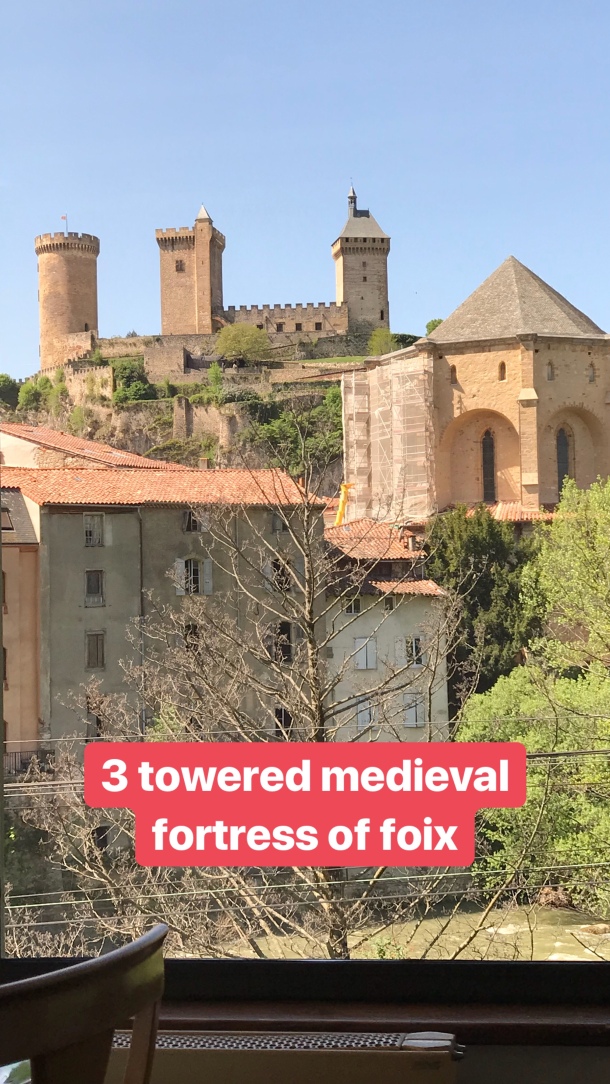 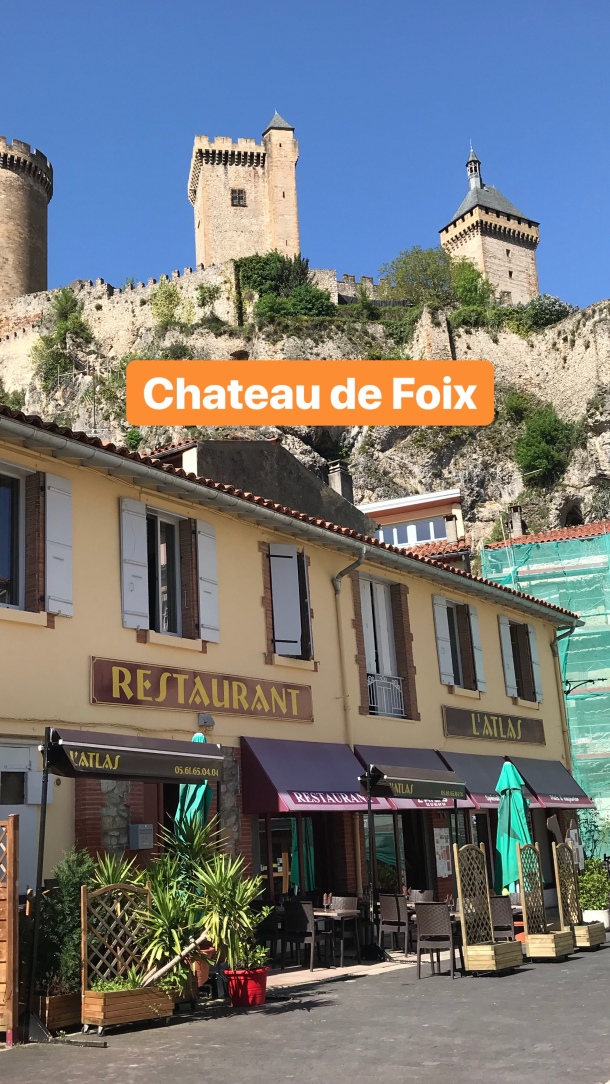 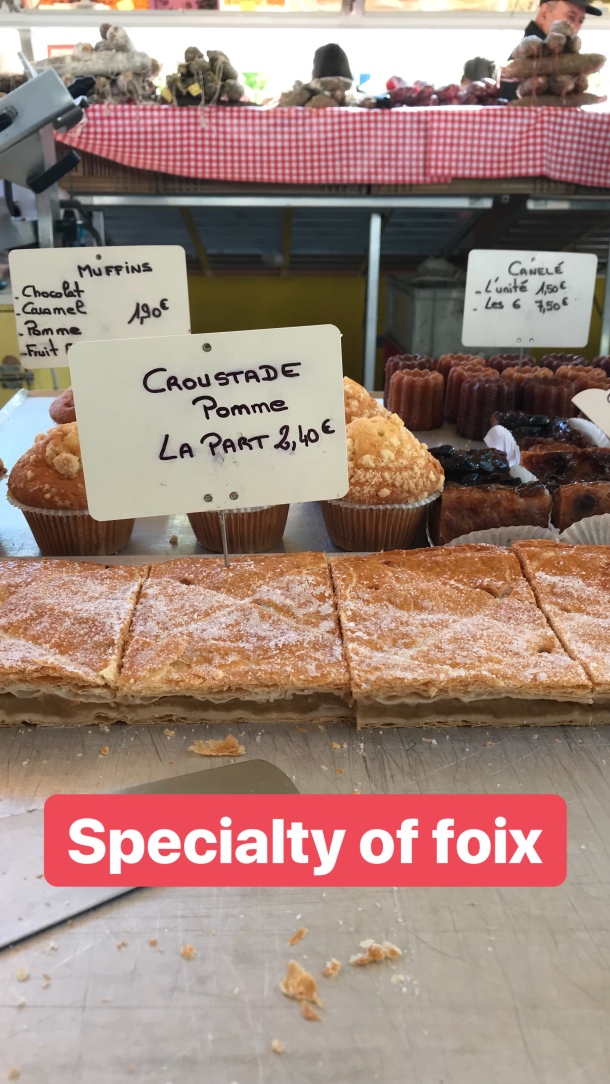 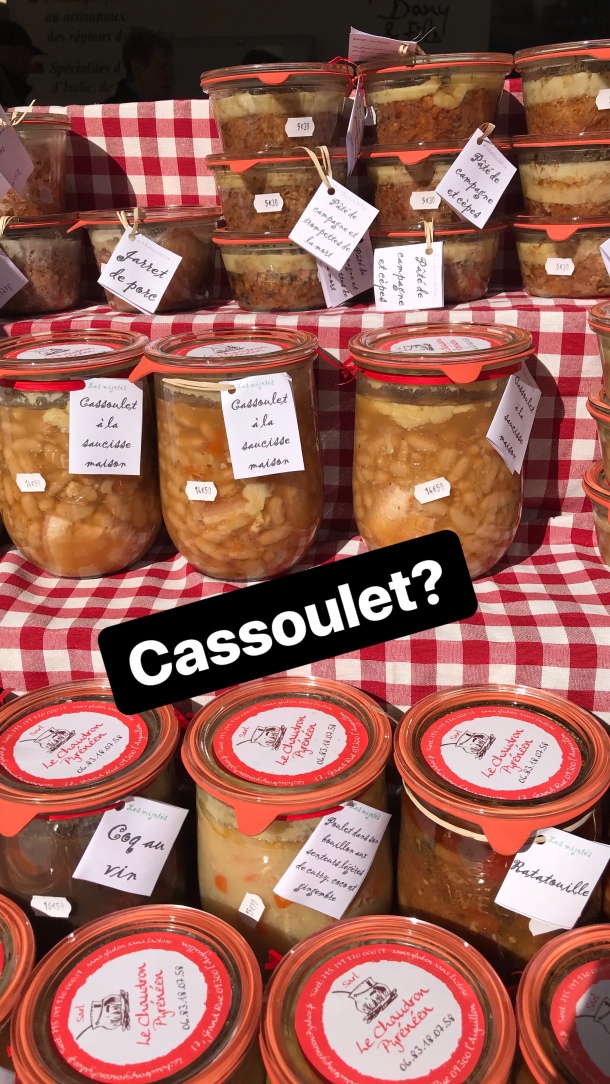 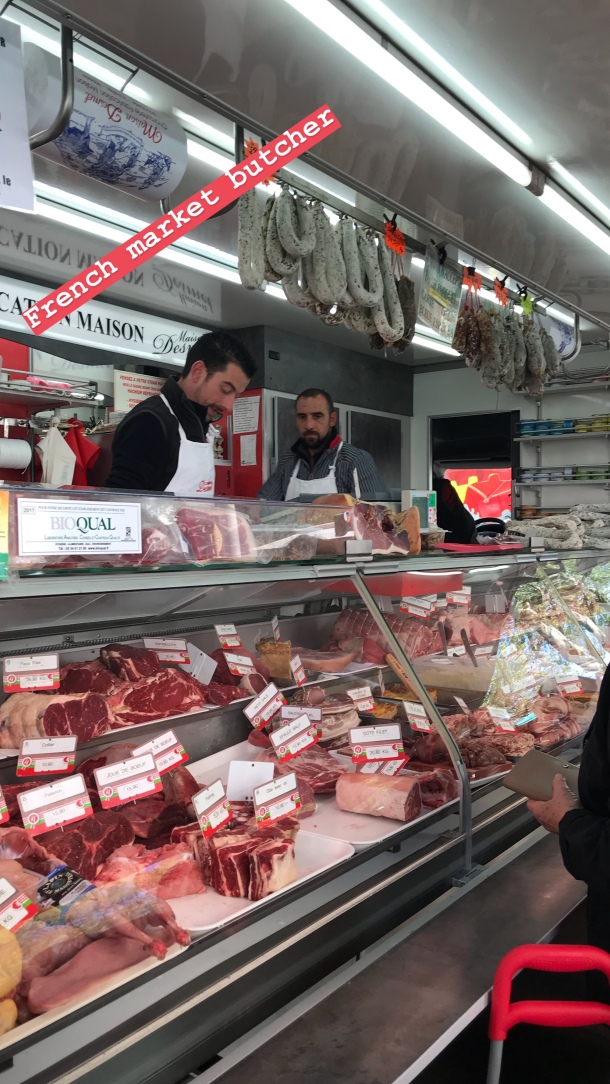 We had an elegant lunch at a restaurant called Phoebus

My first course was a beef carpaccio with shaved cheese and radishes. Dave’s was a puff pastry filled with a rich cheese and served with a sauce

It was a beautiful memorable lunch and we planned on no dinner. Our apartment owners asked us over that evening for a glass of wine with their English speaking friends

We soon learned a glass of wine turns into dinner!!!! Apertif dinatoire!

Next were little squares of their homemade boars meat! And also slices of boars meat sausage they made!

They presented duck breast and onion confit on crackers

Next was a variety of local cheeses and bread

Last was a local style apple crostade/pie which our host made. All of these foods were made by their hands!

We are forever grateful to our hosts in Saint-Paul-de-Jarrat and their friends. They gave us a wonderful stay in their beautifully cared for home which we found through HomeAway. Their beautiful rural setting was an easy drive to many interesting sights! 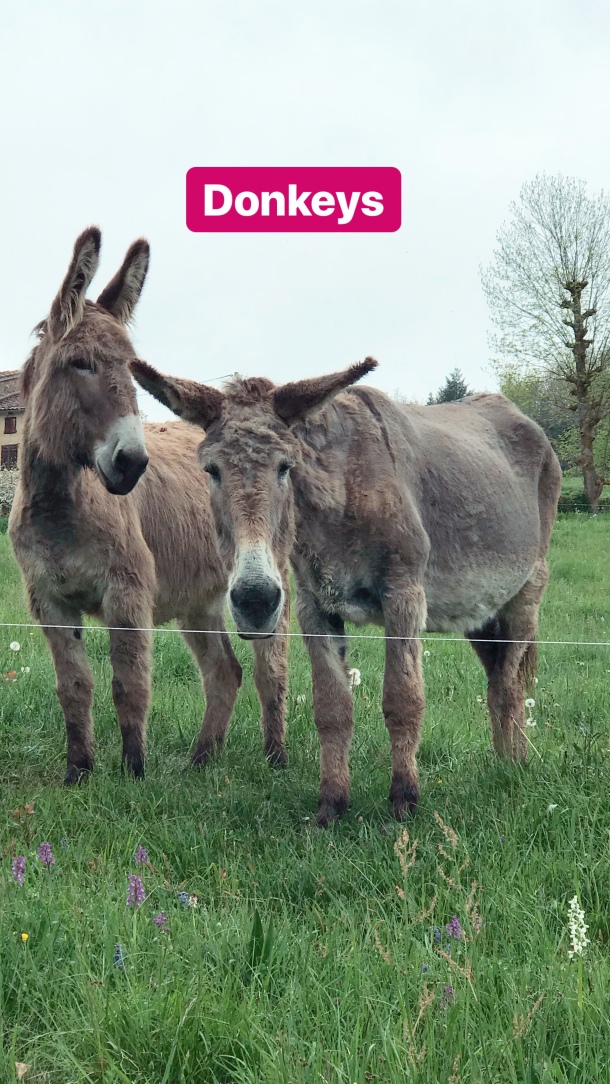 Traveling to the different regions of France we stopped in many rest areas on the highways. Their food service was consistent good quality. Minimal paper products used

Here we enjoy a prosciutto like sandwich on a poppyseed baguette and a Monte Cristo, classic French fast food!

We say good bye to our friends in Saint-Paul-de-Jarrat France as we move on to northern Spain….. San Sebastián! 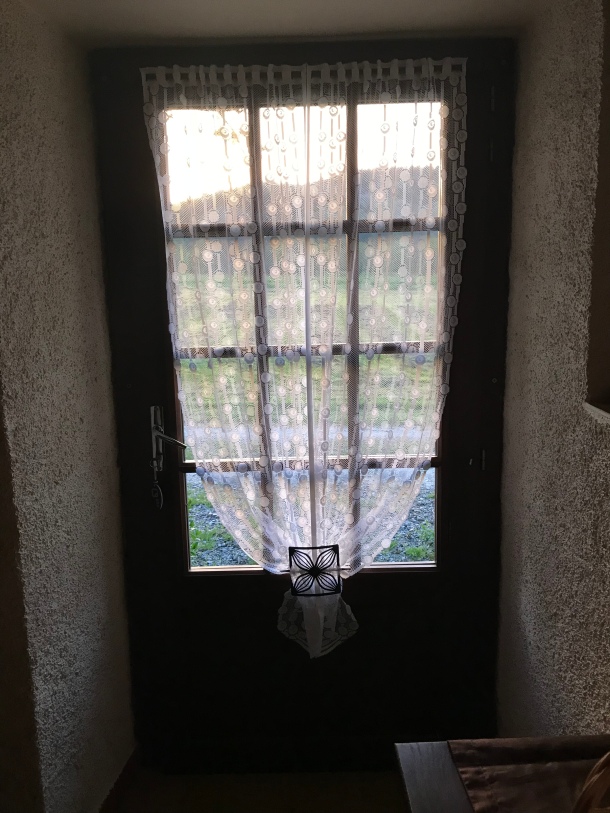